A free floating soap bubble is for example always spherical and a soap film in a flat bubble wand is always flat. The area of the soap film is in both cases minimal. 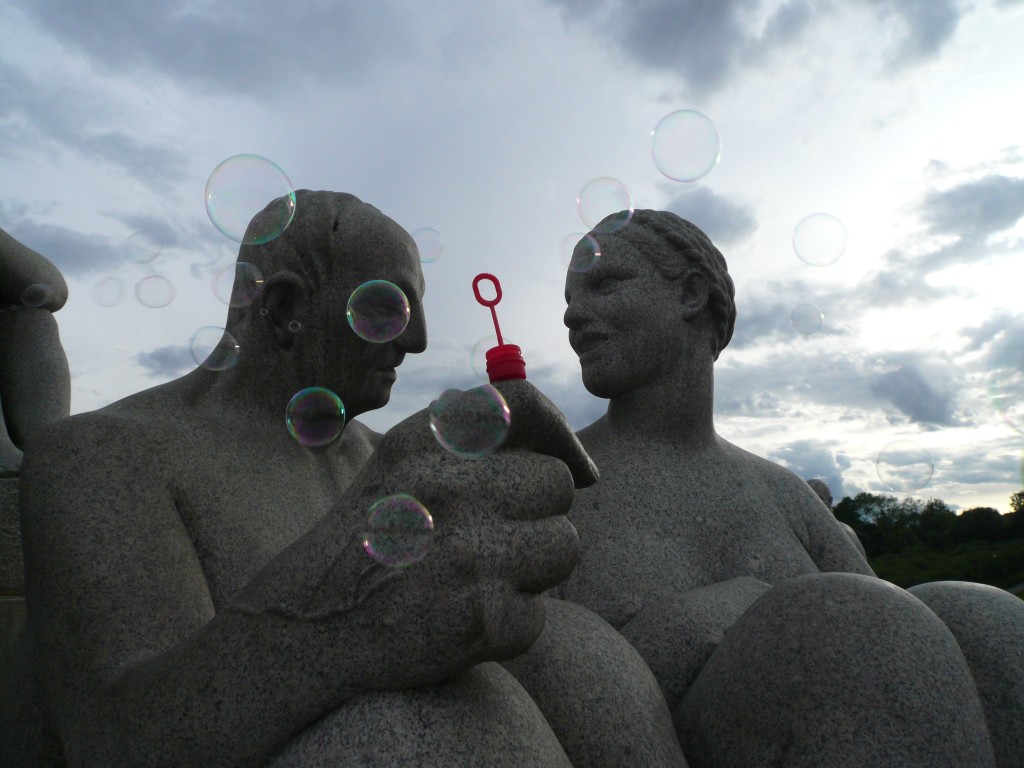 A free floating soap bubble will always be spherical because the bubble minimizes it surface area. 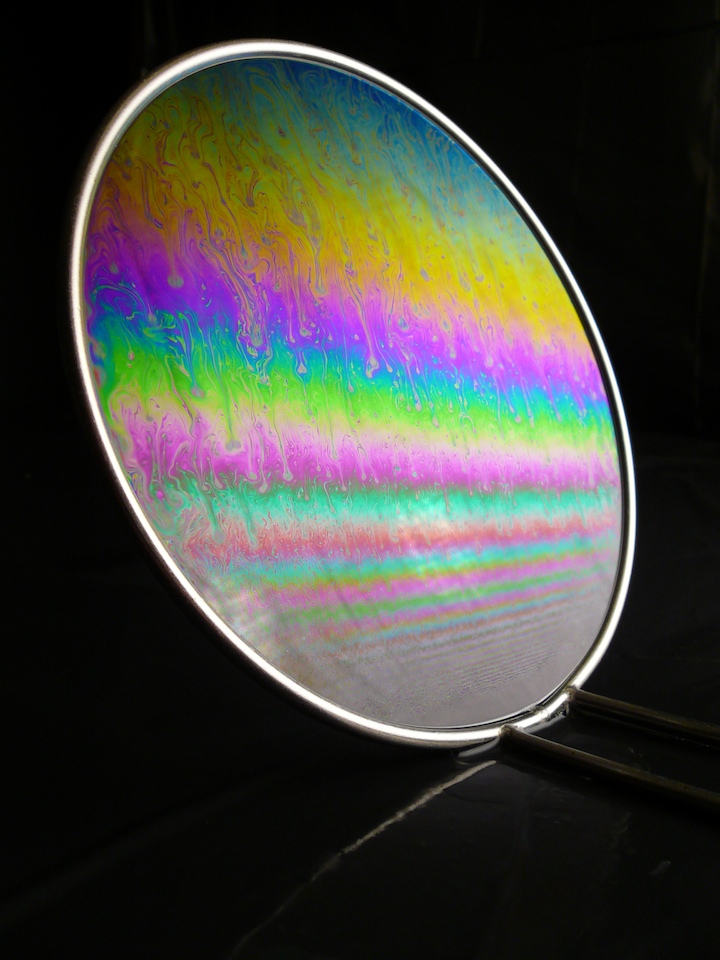 A soap film in a wand is always flat because soap films minimized their surface area.

In the mathematical world it is true that a bubble is perfectly spherical or the film in the wand is perfectly flat. In our physical world however, gravity will also play an important role for the shapes of the soap film disturbing their perfect shapes. In this text we will apply the mathematical perspective and forget about gravity.

If you trap air inside a soap film, and thereby make a bubble, the soap film will no longer be a minimal surface. The film will now enclosure a volume and its total curvature in every point will be larger than zero. The soap film will however still be minimal in the sense that it will present the minimal area with can cover the given volume. You can therefore use the name “minimal construction” for all kinds of soap films. But we do distinguish between minimal surfaces and minimal constructions.

Minimal surfaces and constructions will often be very beautiful shapes. One way to study these shapes is by dipping three-dimensional structures of wire into soap bubbles mixtures. You can for example use a wire formed like a cube. 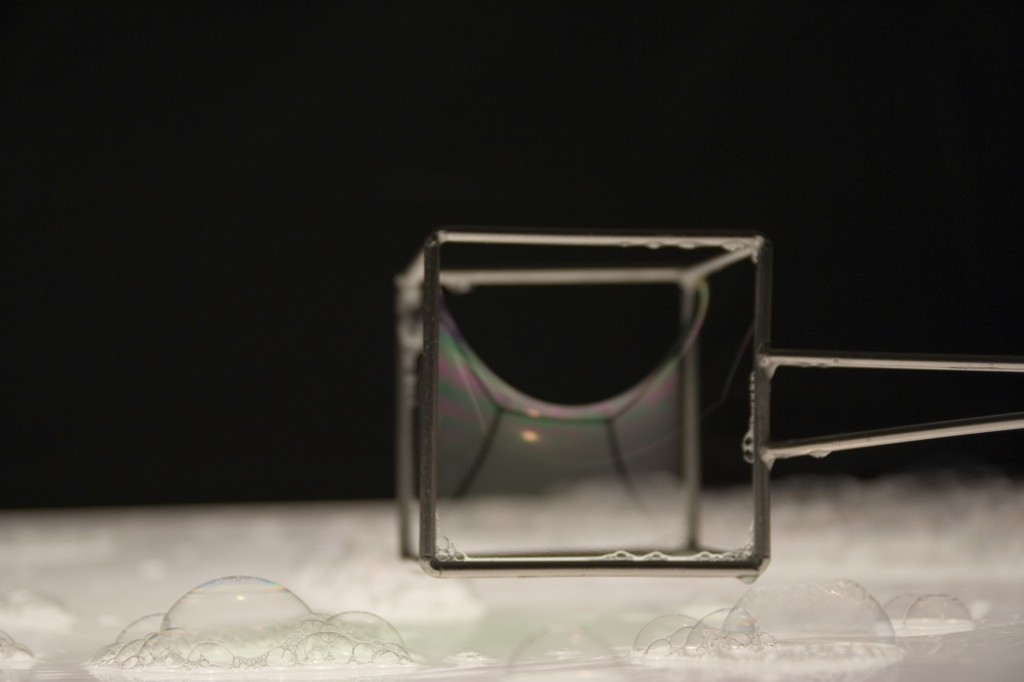 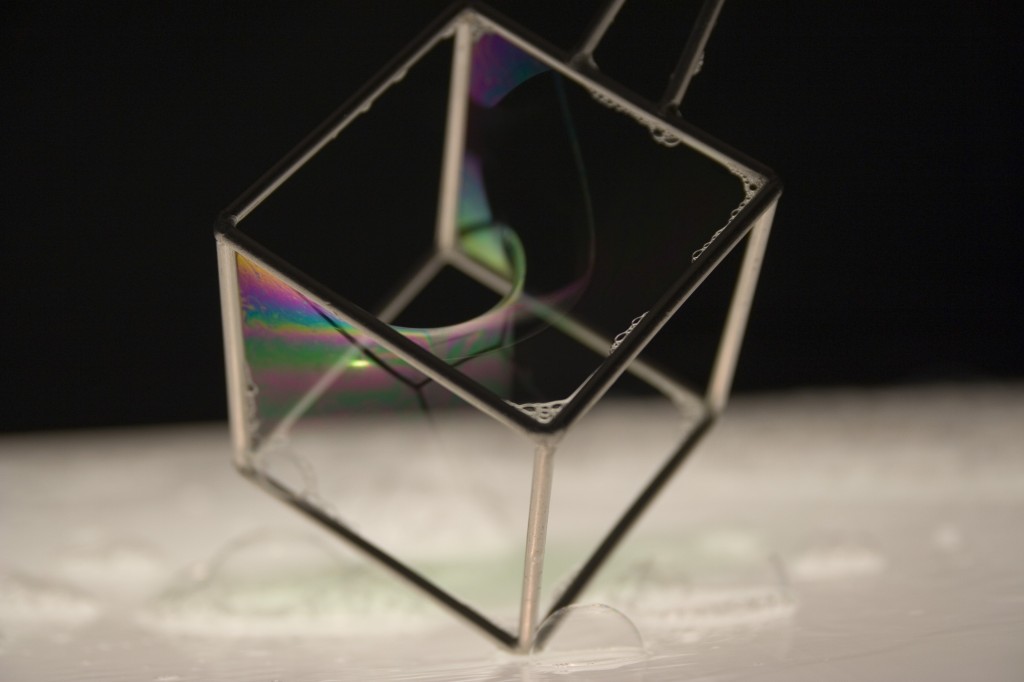 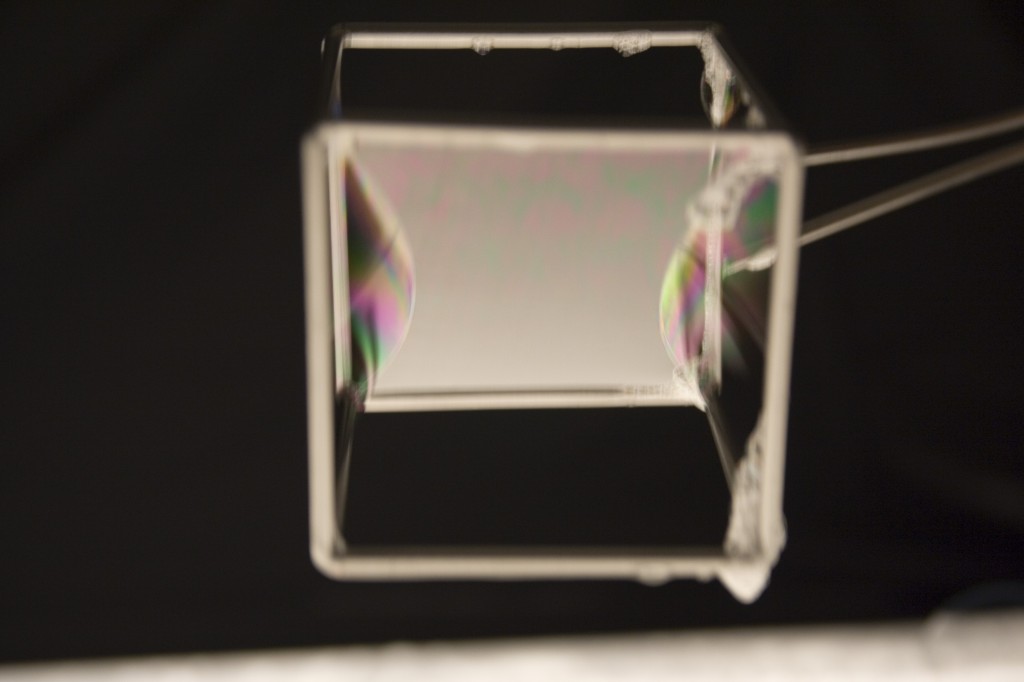 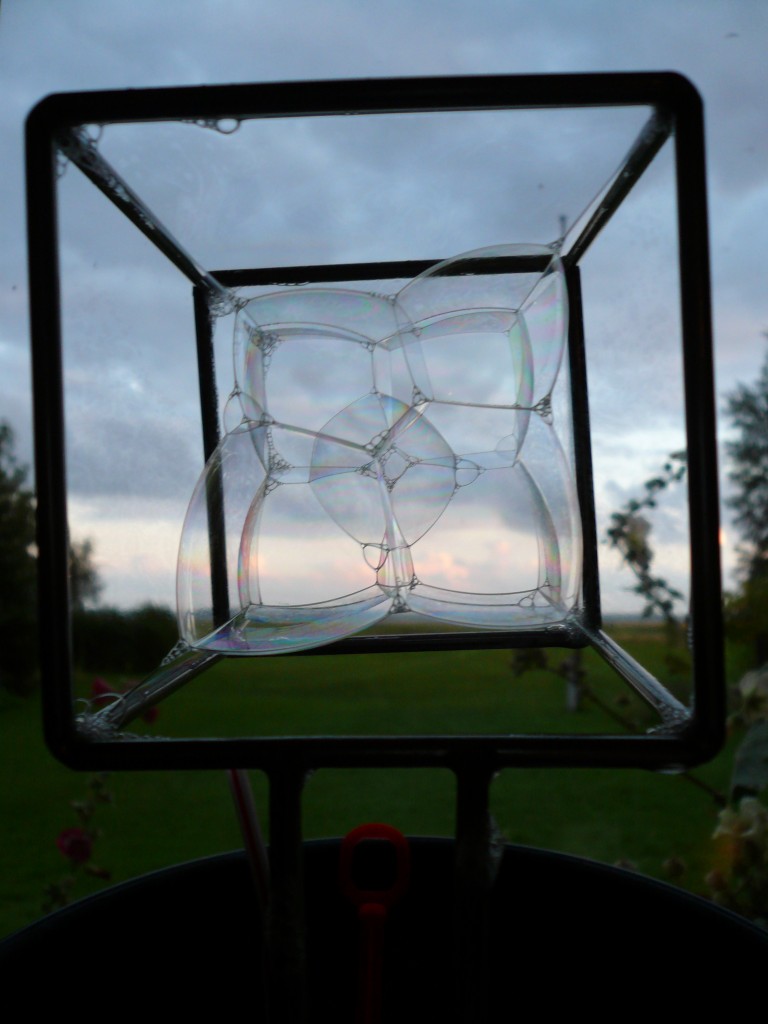 A complex structure in a cube construction. 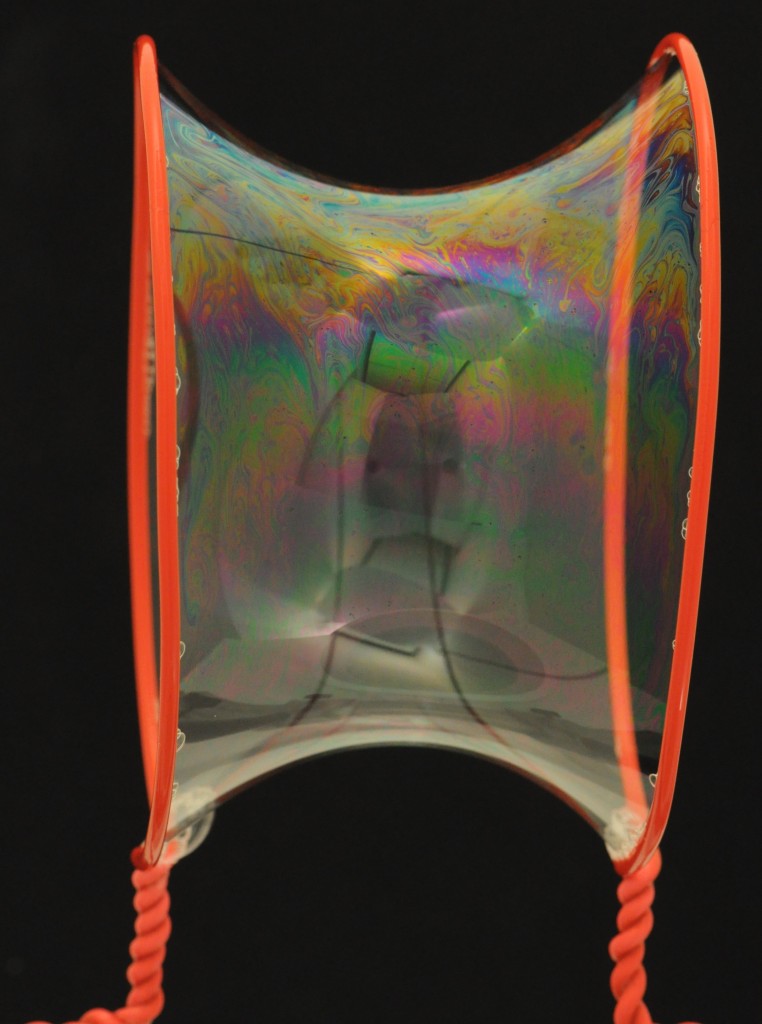 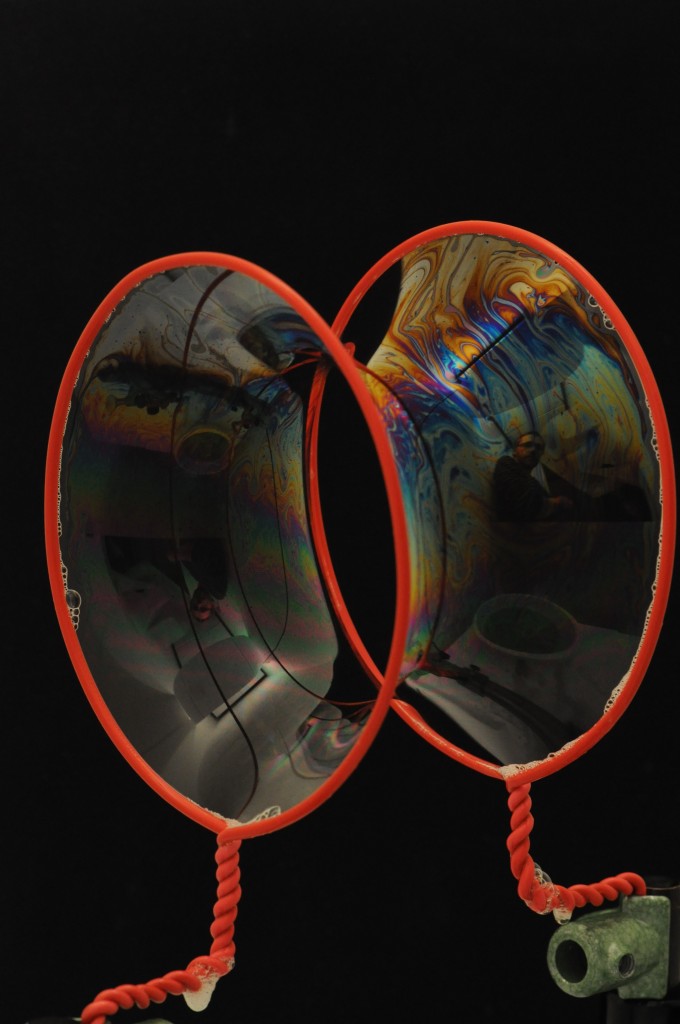 The mathematical shape “the catenoid” made of a soap film. In every point on its surface its total curvature is zero.

Mathematically the catenoid can be constructed by rotation of the curve for the hyperbolic function, cosh(x).

A catenoid (right) is made by rotation of a hyperbolic function (left).

Below, you can see a high speed video of a collapsing catenoid. Notice the small bubble, which is always created in the middle during the collapse of a catenoid.
https://www.youtube.com/watch?v=mziis4pbBOw 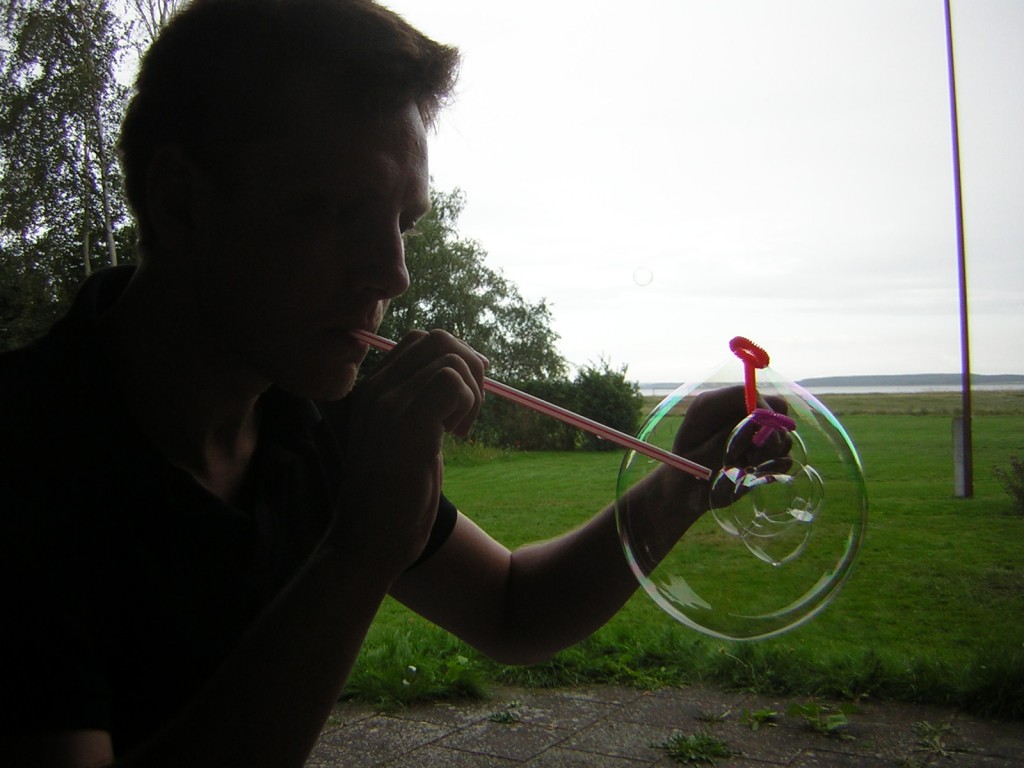 A small carrusel inside a bubble. 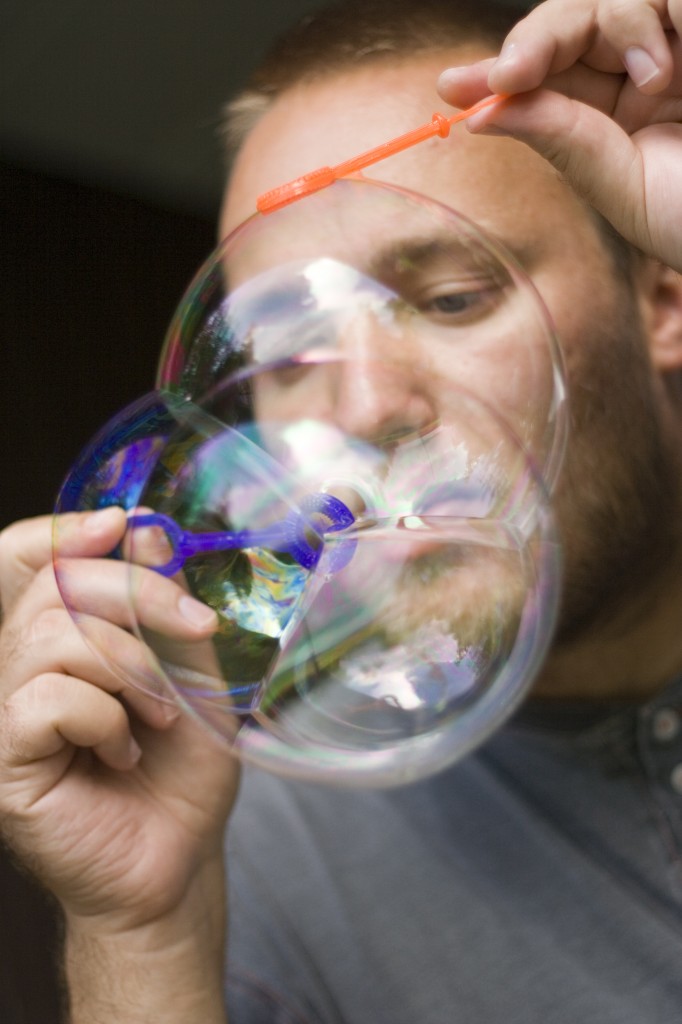 You can build minimal constructions by using two bubble wands (top) or by using a wand and a straw (bottom).