This means that a soap bubble will 'feel' an electric field close to it.

A water molecule (right) like a magnet (left) has polarity. Both have a positive and a negative pole. The difference is that the magnet has magnetic poles, while the water molecule has electric poles.

To understand why water molecules have poles, we should focus on the elements the molecule consists of. Water is made of atoms, and atoms consist of a nucleus and a cloud of electrons surrounding the nucleus. The nucleus is electrically positive while the electrons are negative. The oxygen nucleus is large compared to the two hydrogen nuclei. The large oxygen atom will attract a larger part of the surrounding electron cloud than the smaller hydrogen nuclei. The electron cloud in a water molecule will for this reason be shifted towards the oxygen side of the molecule. This results in a negative pole at the oxygen side, and a positive pole at the hydrogen side. Because the water molecules have polarity, they will behave similar to magnets; they will attract each other just as magnets do.

Water molecules attract each other because of their polarity.

Now we are ready to understand the surface tension of water. A water molecule in the middle of a glass of water, will feel the attractive force from all sides by the neighbouring water molecules surrounding it. It will be pulled just as much from above, from below, from the left and from the right side, and all these attractions will cancel out each other. The result is that the molecule is not feeling a net force in any particular direction. Water molecules in the surface, will only feel attraction from three sides; from the right, from the left and from below, but not from above the liquid surface, because there are no water molecules here. The forces from the left and from the right will cancel out each other, but there is no force to equal the force from below. The net force on a surface molecule is therefore down into the liquid. You can say that the water is always trying to pull its molecules away from the surface. The water will try to shape its surface, so that a minimum number of molecules are situated here. In other words: Water will minimize its surface area. This phenomenon is what we call surface tension. 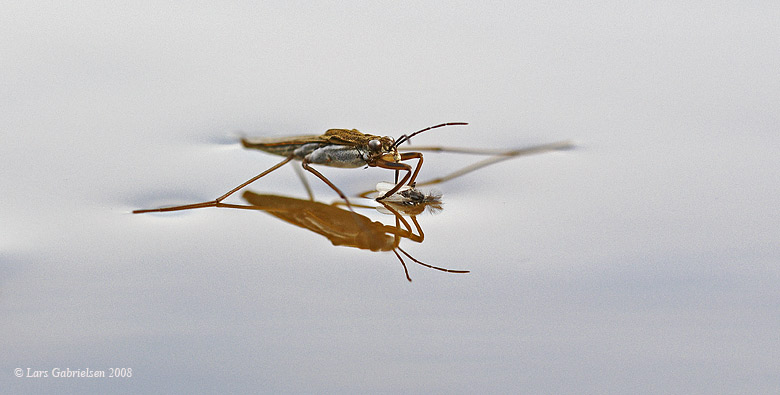 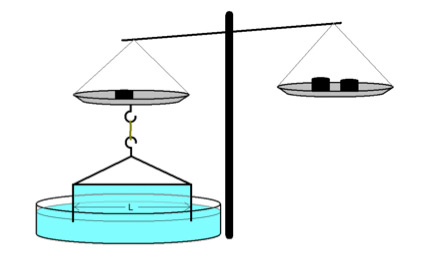 The work done when pulling the tool out of the surface can be described mathematically as a constant, times the area of the liquid film:

We multiply by 2 since the soap film has two surfaces. The constant is the surface tension, and the equation can now be used to measure its value.

By isolating   in the equation above and by inserting the definition of work (), you can calculate the surface tension of the liquid: